Over the past several years, there has been a resurgence in the adventure game genre. TellTale has experienced huge success with Sam and Max, Back to the Future, The Wolf Among Us, The Walking Dead, Game of Thrones, and Batman. Sierra Entertainment, famous for the plethora of Quest titles (not to mention being the originators of Crash Bandicoot and Spyro the Dragon) has been relaunched with the release of a new version of King’s Quest, developed by The Odd Gentlemen. Companies such as Crystal Shard, and their releases such as Heroine’s Quest: The Road to Ragnarok, show that interest in this classic genre has never really died, and numerous kickstarter campaigns by oldschool developers prove it.

The upcoming game from adventure genre legends Ron Gilbert and Gary Winnick, is Thimbleweed Park released by Terrible Toybox. The duo previously collaborated on Maniac Mansion and the Monkey Island series in the late 80s and early 90s. Thanks to fans around the world fully funding their KickStarter, development began in Dec. 2014 and the release should be soon.

Described by Gilbert as a satire of X-files, Twin Peaks, and True Detective, the game centers on the fictional dying town of Thimbleweed Park and the strange characters that live there. Two government agents, one a redheaded woman, investigate a body found under a bridge. However, “In a town like Thimbleweed Park, a dead body is the least of your problems.” The town was once a thriving hub of culture thanks to the world famous pillow factory lead by Mr. Edmund.

A trailer for the game introduces us to a foul-mouth clown name Ransome who has fallen from fame and is now searching for the plans to the doll that will be his comeback. It also teases characters including the ghost of a pillow salesman, a disinherited game designer, and guys dressed like birds.

While several of the newer adventure releases have taken full advantage of modern graphics and control schemes, Thimbleweed Park plans to seem like a lost LucasArts game that was recently found. Classic “verb choice” controls will allow players to make such choices as “look at notebook,” “walk to Arrestron 3000,” and “use balloon animal with corpse.” 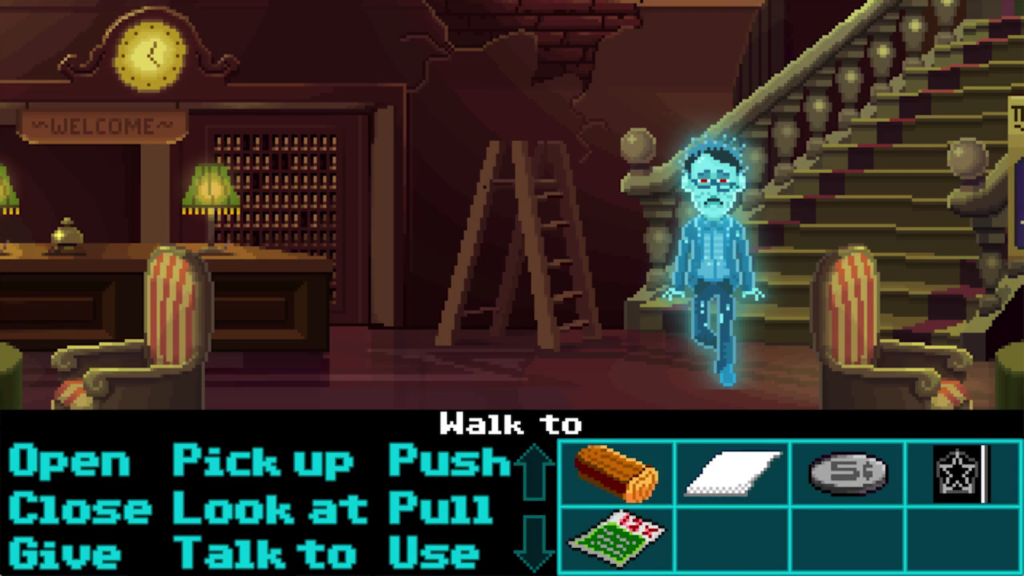 The neo-noir adventure game promises that five playable characters will help to unravel the dark humorous mysteries of the town and the egotistical, A.I. obsessed man that runs it. Exploration will be self paced, and jokes are guaranteed every two minutes! It also boasts no deadends, no stupid puzzles, and some more stuff.

For those interested in finding out more about the game and the town, there is a blog, trailers, and a podcast at thimbleweedpark.com that cover the entire development cycle.